Shooting detailed photos of the moon in any phase or time of day is surprisingly easy and doesn’t require really expensive equipment. I use the $200 Sigma 70-300mm f/4-5.6 DG APO Macro Telephoto zoom lens on my Canon 60D. It’s a very sharp lens — especially in macro mode or when zoomed in to 200 or 300mm.

THINGS YOU WILL NEED:

The moon is already on a schedule so it’s your job to plan accordingly. The time the day moon rises and sets and when it goes through a phase varies a lot from one month to the next. The best thing to do is check the current moon phase somewhere online or on an app. The app I use is Moon Phase Pro. That one gives the moonrise and moonset times for any date you enter at any location. I use it in the screenshots below. It’s only available for Android, but I’m sure there are many similar iOS apps out there.

First you should get familiar with the moon cycle.

When the moon is new there’s nothing to photograph. This is the time to take advantage of the darkness for star or meteor shower photos. 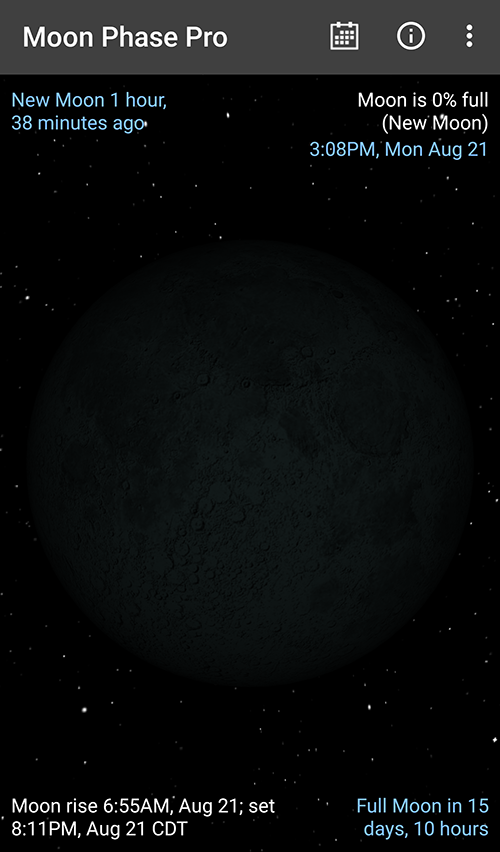 The full moon is just 100% illumination of the moon, obviously. 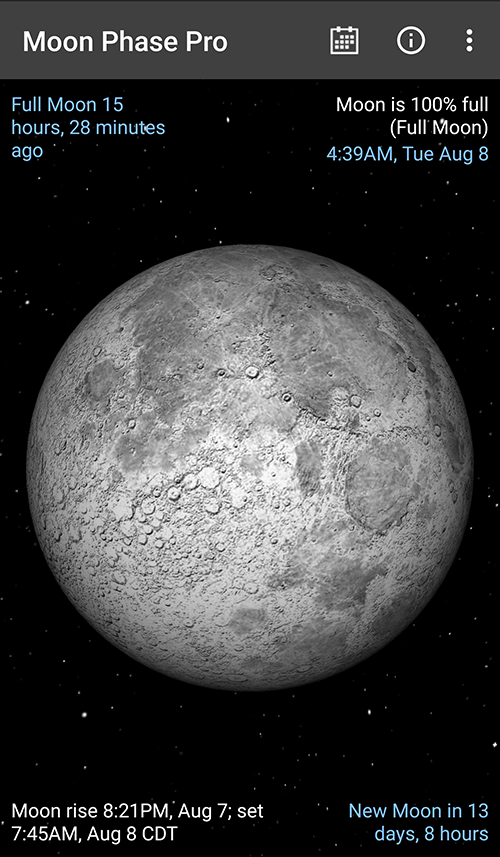 If you’re lucky and get a chance to shoot a total lunar eclipse you can capture all of these phases in a matter of minutes. I know I said you need a tripod, but I didn’t use one to shoot the lunar eclipse. I just rested the lens on the side of my car’s appropriately named “moon roof.”

Interestingly enough, despite this being night photography you will need to use pretty fast shutter speeds to capture all the details of the moon at a correct exposure. Just set up your tripod and find the moon in the sky. I usually use live view and use the 10x digital zoom to make sure the focus is spot-on. To avoid camera shake, set the camera to a 10 second timer so it has time to become completely still from the time the mirror pulls back. Be aware that even a slight breeze can cause camera shake. 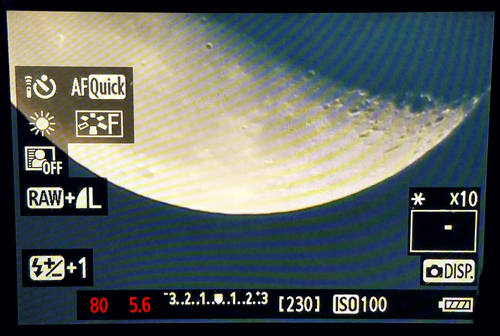 Make sure to center the moon. The lens is often sharpest in that area. You may need to re-adjust the tripod frequently because the moon moves across the sky quickly.

I shot these the morning I wrote this tutorial to get a reference image for the settings on the live view screen. It was shot at around 7 a.m. The moon was in the phase below:

Shooting a crescent moon is sometimes a bit more difficult. There’s a lot less light, and the moon will move through the sky pretty fast on a long lens. Using a long exposure isn’t ideal either, but I have experimented with it.

I use bridge to compare the shots and find the sharpest image. Then I crop the image, increase the contrast, and sharpen the image. Sometimes i’ll adjust the color to match what i remember seeing when I was shooting. Sometimes the auto white balance will remove the red color, so I just add it back in.

You can shoot the moon with film as well, but the quality will be degraded if you don’t have a long enough lens like, maybe an 800mm. 300mm on a full frame 35mm film doesn’t have any crop factor and it will need more cropping in post. The grain is too prominent and I don’t know that the lens I used wasn’t really designed for use on a full frame camera. I still managed to get the photo below:

I used 400 ISO film for this photo so the grain really takes away from the details. The resolution of the scan doesn’t help.

You can shoot during the day as well, if the moon happens to be out. 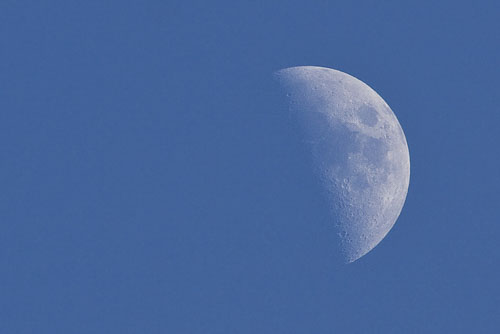 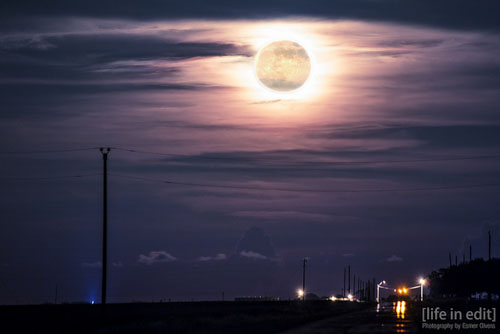 A landscape shot made from 2 exposures can be done too. Just do a long exposure on one shot and one with a correctly exposed moon. Superimpose the correct exposure of the moon over the landscape shot. I won’t go into that now since I will explain how to shoot night landscape and star photos in the next tutorial.